A real source of inspiration for me at the moment is Lace. I love the intricate detailing and the patterns and spaces created as part of the fabric. So when I heard about the Lost in Lace Exhibition at the Gas Hall, Birmingham which saw the interpretation of Lace on an Architectural scale I was desperate to go. Fortunately we were invited down for a wonderful little gathering over the festive period by our friends and so an opportunity to visit the exhibition was too good to be missed.

From an architectural point of view I was hugely interested in the curator's challenge of 'how to shape the perception of the potentially radical relationship between the structure of lace networks and architectural space? Questioning the ways in which we move through space and the nature of boundaries and thresholds'

'Through a series of dramatic and ambitious new site-sensitive installations, the works in the exhibition play with ideas around the holes, spaces, boundaries and structures that lace creates. Through changing its scale, to create large and small installations, the artists draw attention to these different qualities.'

Walking into the exhibition we were confronted with large scale, theatrical and visually spectacular work challenging the perceptions of lace.

Each wonderful site-specific installation works with the bare fabric of the building in its own way. From the intricate to the monumental, the contemporary works on show encouraged us to renegotiate and wander round and through the mysterious new environments created by each of the artists, exploring the physical environments and the blurred boundaries that emerged. Each art work had adjacent a small sample piece  to be handled, which was a delightful way to experience the works in even more detail, from a very sensory aspect.

I really loved the Italian definition of lace, where it is sometimes described as being like 'stitches in the air', which seemed very fitting for the works on display. All of the work was truly amazing but here are a few of my favourites. 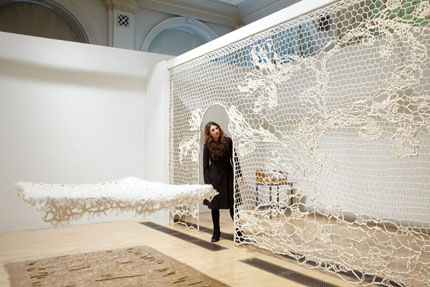 Annie uses the traditional needlepoint lace of Alençon, which is largely inspired by the drawings of plants and gardens and flowers. I was drawn to the beautiful words and sentences which were twisted out of wire and laid, layered beneath the bed creating their own wonderful forms through a lace type structure. 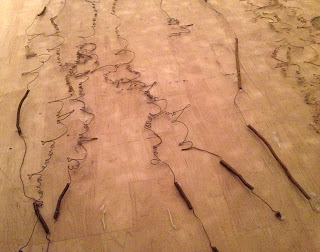 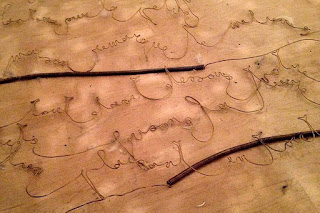 Lace the Final frontier, by Michael Brennand-Wood, is inspired by the diagrammatic, schematic linear designs that a lace maker worked from. His intention through the piece is to 'construct 'a ‘military lace’ emblematic of conflict and the annexing of resources and territory. Imagery for the roundels is drawn from three sources; lace, weaponry, and the Rorschach test. The visual field of the work echoes the instructional, pricked, diagrammatic papers on which bobbin laces are constructed – in this case a fusion of Islamic and Western geometry'. 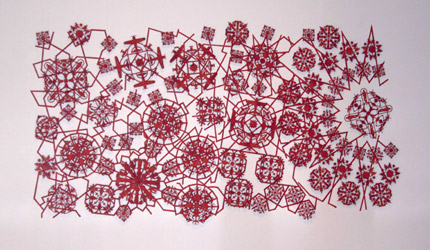 I loved the overall simplicity in this piece and the intricate complexities up close in detail. As an Art Student I was really influenced by the Futurism movement, it's geometric forms and relationships to technology, represented through layering and collage. This piece really took me back to the feelings I'd discovered in a lot of those works. 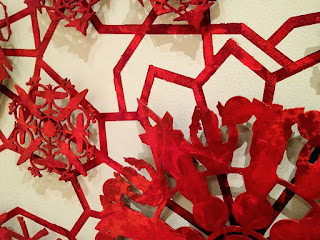 One piece which was truly beautiful for its simple complexities was, A thin line between space and matter, by Tamar Frank. This beautiful hyperbolic-paraboloid piece was set inside a blacked-out box inspired by the buildings open-work ornamental iron arches. The only light in the box cleverly lit each thread forming the art work, which dynamically changed in appearance as you walked around the structure. I could have spent hours in there. 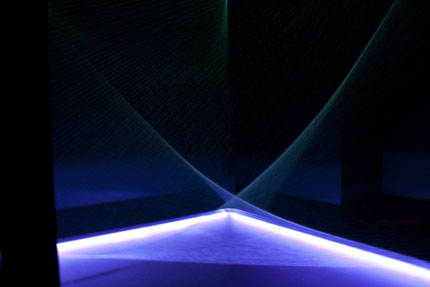 In Percieds, Katharina Hinsberg transfer images using a pouncing technique, traditionally used to transfer pattern from paper to cloth by means of pricked holes. The ‘pounce’, a fine powder, was rubbed through leaving a pattern of dots on the cloth. The dots have been drilled through the wall of the exhibition, creating beautiful subtle imagery. The fascination of this piece is in it's appearance from many view points. From a distance the arrangement of these holes look almost floral, reminding me of the petals of a rose. 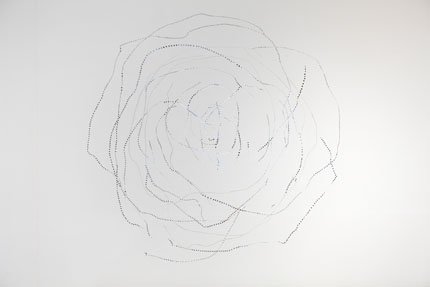 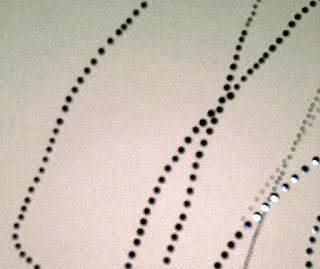 'Perceids, written with a ‘c’, so as to conjure the association with the French word for drilling,‘percer’. Perceids also stands for the meteor showers in the Perseus constellation, connecting the work to an antique concept which sees stars as holes in the membrane of the sky'. It was interesting to see how the light beyond the work effected the visual appearence. 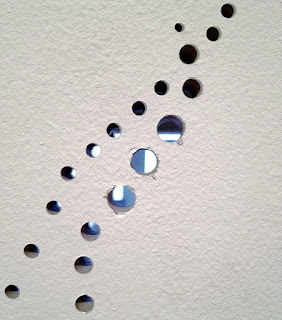 No Reverse - Lace by Ai Matsumoto. Was an intricately visually stunning piece made of silicone impressions of Lace cloth. 'As the cloth is removed to reveal a new surface layer, the imprint of its memory suggests a loss of the time and labour involved in its making'. 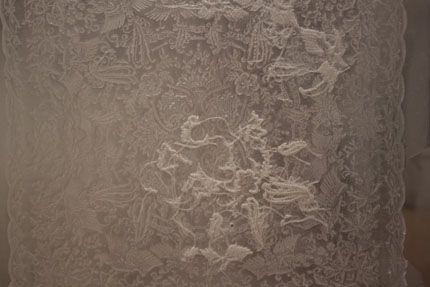 After the Dream, by Chiharu Shiota, takes from the techniques in Lace making to form a beautiful mass of intricately woven black strings. 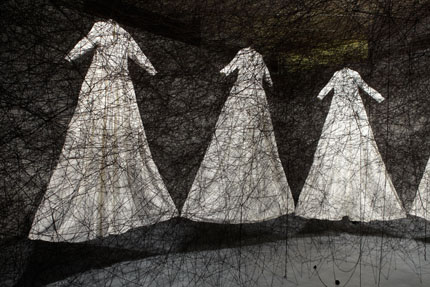 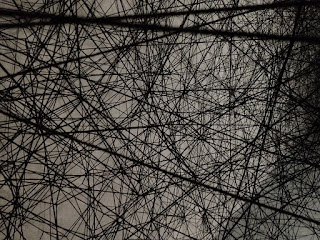 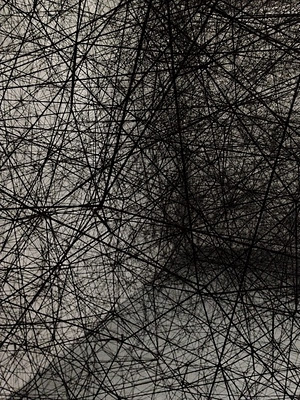 A dense world of wonderful layers which you can't help but want to touch and climb inside of. I particually liked the fixing details of the piece back to the wall. 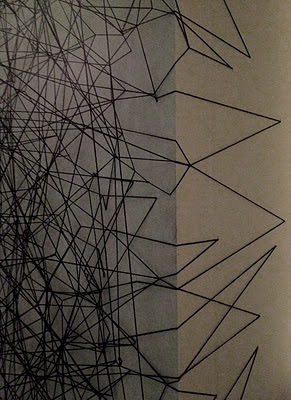 Last but not least was probably my most favourite, Lacing Space (detail) by Piper Shepard concentrates on a Point de Gaze style lace from the collection of Birmingham Museums & Art Gallery. Piper has 'developed a textile that reflects the compositions of the architecture in the Gas Hall exhibition space, its columns, arches, and lines, with those of the Point de Gaze lace. Interest lies in the connections between textiles and architecture and cloth’s ability to provide shelter, protection, to decorate and ornament space'. 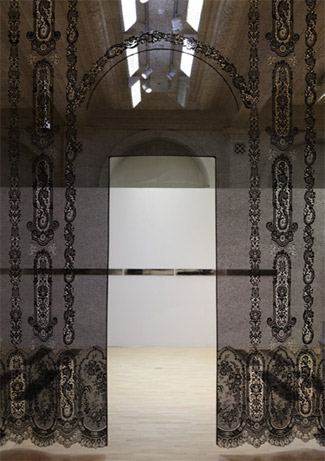 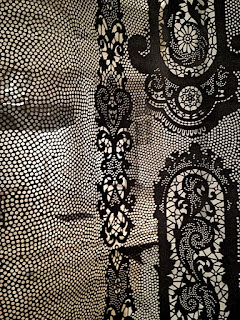 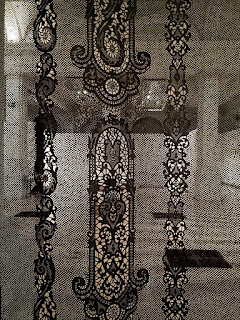 This piece really appeals to the paper cutting enthusiast inside of me and has really inspired me to do some sketching using my own lace resources for some potential pieces of my own. 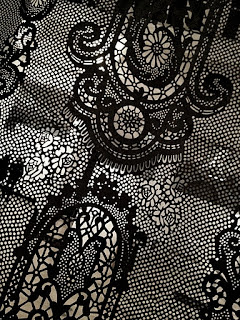 The exhibition is on until the 19 February 2012,  Admission Free. If you get the chance to go I'd highly recommend it!

Posted by little man designs at 19:48